← For Colored Girls
Have You Laughed Today? → 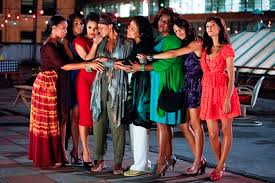 I heard a lot of positive remarks about Tyler Perry’s new movie For Colored Girls. Most people who had seen the movie suggested that it was a movie that I needed to see and so, as you can predictably expect, my anticipation and anxiety grew.  After all, I am known for my love of movies. I became intrigued. This was clearly something that needed to be checked out.

I am not going to bore you with the details of where I went to see it, or how I got there. Let’s just say, I got a comfy seat and mentally prepared myself for the upcoming ordeal.

I did not have long to wait.

The movie started out slowly. Gradually, we began to be introduced to the all-star cast. You could clearly see the characters beginning to settle into their roles.  After about 20 minutes, I began to notice that this movie did not have a nice continuous flowing narrative. It just didn’t seem like the movie had a central plot: at best, it seemed to be a fortuitous mishmash of painful or rather tragic experiences. There was this sinking feeling I had when I discovered, much to my chagrin, that my suspicion about this movie was right.

If you ever sought a cheap, bland, uber-emotional, stereotypical, feminist propaganda aimed at demonizing men, this is the movie for you. In summary, this movie is just cheap gynocentric emotional blackmail. This is the kind of movie one takes sad, depressed and disgruntled women to see so that they can turn all their frustrations and bitterness against the men in their lives or against men in general. Misery loves company, isn’t it? It was just one tawdry estrogen-packed pile of virulent misandry. I don’t know why men get suckered into watching these pieces of petty feminist propaganda anyway.

You see, before I went to see this movie, I had the vague suspicion, judging by the fact that this was a Tyler Perry movie involving a whole bunch of black actresses, that it was going to be nothing but another tiresomely repetitive catalogue of black women’s complaints against men in general. Indeed, everywhere you care to turn these days, you are assailed by the noisy whining of the shrill viragos that have hijacked the women’s liberation movement, and turned it into a man-hating feminist propaganda machine.

Let us examine some of this insanely twisted storyline.

a)      Kimberly Elise plays Crystal. She is a hardworking single mother to two children. She is also the breadwinner it seems because her live-in boyfriend and father to her children Beau, played by Michael Ealy, is a physically abusive ex-soldier who apparently cannot get a job nor adjust to civilian life. The movie is rife with his general assholery—including scenes where he repeatedly punches her. Apparently, the director thought it fit to suggest to us that the main reason for Beau’s general instability seems to be the disappointment caused by Crystal’s refusal to marry him. In the end, this crazy loon murders his own children in the full glare of the public by throwing the children down from a high rise when Crystal once again refused to marry him. And away he goes to jail. How convenient! The rest of Crystal’s character is spent tugging at heart strings; casting a most pathetic and disconsolate figure as she staggers and lays around bemoaning the loss of her children.

b)     Janet Jackson plays Jo. She is by all appearances a successful owner (or possibly CEO) of some magazine company. Her time is spent ordering staff around, and being the perfect completely detached, emotionally cold boss. She is trapped in a loveless marriage. Of course, her husband is to be blamed, if you go by the narrative. Apparently her cold, domineering and bossy ways do not count for anything. Her exclusive dedication to her job is ignored; the constant monitoring and harassing of her husband (she has more money that her husband you see) cannot be blamed for her icy relationship. When her struggling broker husband dips into their family fund and invests without telling her, he is removed from the account. When he doesn’t return her missed calls, he gets an earful. But apparently, by the director standards, all this is honky dory. In the end, another irredeemably unworthy man, confesses that he has been cheating on her with other men. She tosses the downlow brother and the marriage is ended. What is wrong with all these men anyway? Aren’t men just another word for “vicious evil”? But of course – isn’t it the way society is now? Ever noticed how that in most TV show families, the dads are goofballs? And how the mom has to keep the family together with her special “graces”? Who cares that the young are being informed that the father figures in their lives are often dumb, unfaithful bastards anyway?

c)      Loretta Devine plays Juanita Simms. She is the big hardworking, romantically tender nurse who has mostly been unfortunate in love. She has a lot of love in her heart to give a worthy man, but the men she had known always left her for other younger and possibly hotter women. So now she runs a centre where she gives pep talk to birds of the same feather. Sadly in her case though, no matter how hard she tried to leave her man, she just couldn’t resist the power of his kisses, his touch, and his manhood. In the end, another terrible specimen of the male species goes down when he steals half her belongings, runs off to another woman, is rejected and comes back to Juanita bearing flowers. He is dumped with a lot of fanfare and the man walks away with scarcely a show of regret—inviting the audience to shudder at the cold contemptuous and devious machinations of men.

d)     Thandie Newton plays Tangie. She plays a sultry hot bar maid. This was one of the funniest characters because she was just plain crazy. Coming from a sexually molested, bruised and battered childhood, this woman was concealing a lot of pain and resentment for her mother, sister and pretty much everyone. Her only source of comfort was in countless sexual encounters with strange men. Apparently, she craved the feeling of being desired and wanted by men who treated her like the sex object she really was. And those brief moments were enough for her.

e)      Anika Noni Rose plays Yasmine. This seemed to be the only genuinely happy and balanced woman in this whole movie. She taught a ballet dancing class for younger women in the neighborhood. She was quite elegant and beautiful I have to say. Then as the story goes on, she dates one seemingly stand-up guy—had a job, was gracious and funny etc. You know the usual superficial stuff that women go for these days. It turns out this man was a veritable green snake in green grass. He manages to get her to invite him into her apartment on a date. What happens next? Well, a guy whom the director had previously striven to present as a respectable gentleman suddenly notices Yasmine bending over to get something from the fridge. Then he attacks her in her apartment, overpowers her and rapes her. He gets his just comeuppance however when he is stabbed to death by one of his victims—a befitting end for such callous brutishness.

I could go on and on. It was a hodgepodge of absurd female victimhood and grossly exaggerated male complicity. But I think the picture is beginning to crystallize. It was like the script-writers deliberately went out of their way to present a gross misrepresentation of so-called gender warfare. There was no attempt at presenting a balanced and realistic picture of cross-gender interaction. There was no attempt at presenting credible scenarios. At times, the characters’ lines seemed like a poetry recitation. The men were the clear villains—and their villainy was hyperbolic to the point of annoyance. Perhaps all that is intentional. Perhaps, it is just aimed at creating emotional release for the multitude of women out there who have some cause to believe that the men in their lives are the banes of their existence.

I am not too sure there are any encouraging positive lessons that one is supposed to learn from this movie.  I am convinced that the feelings which a vast majority of unsophisticated, non-discerning impressionable younger black females will get from watching this movie is clearly that MEN ARE DIRTY, DOUBLECROSSING, DRUNK, DOWNLOW, DECEITFULLY DUBIOUS, DANGEROUS DEVILS.

And who can blame them? It makes me wonder what this portends for future black-on-black heterosexual relationships.

I hate to sound alarmist, but cheap non-edifying poison like this movie will simply help to bring forth a future generation of emotionally detached, violence-prone, selfish, materialistic, impulsive and paranoid vipers. Woe betide the good men left; woe betide the conservative old-fashioned average Joes – by the hands of their serpentine wives or girlfriends, they’ll suffer the full brunt of the waywardness of the morally lax male.

Go check out the movie if you want – but I wish someone had told me ahead of time to prepare for the hyperbolic emotional blackmail.

P.S – There were perhaps only 3 men that saw this movie with me. Two of them were white senior citizens; the other looked like a skinny Asian student. It was a good thing though that at the end of the movie when everyone filed out of the theatre, no woman, threw me any questioning, disapproving glances. I just want to believe that maybe it was because I watched it late with the mature crowd.

← For Colored Girls
Have You Laughed Today? →