This season’s series of El Clasico clashes will end tomorrow after Real Madrid comes to the Camp Nou for the return leg of the Champions League semifinal encounter. The winner of that matchup will in all likelihood meet Manchester United in the final. Before these recent encounters between the Merengues and the Blaugrana started, a lot of devout football fans were beside themselves with joyful anticipation of a great season of impressive football that would thrill like never before. Memories of the 5-0 defeat that Barcelona handed to Real Madrid last November were all the more reasons why people were anxious to see how Real Madrid would avenge that embarrassing defeat; or else, whether Barca would come close to another impressive and dominant performance.
Sadly, the past three encounters have left a bitter taste in my mouth. To tell you the truth, I am disappointed by what has gone down so far. I’ll make a few observations here.
A. Barcelona’s quality of play has been on the waning end lately. I don’t know exactly why that is the case, but their overall performance is not as crisp and as stellar as it used to be earlier this season. For one, Pedro and Villa need to rediscover their goal-poaching instincts. It used to be that in any match, the opposing team’s defenders could not really decide who to cast their attention on between the three forwards Messi, Villa and Pedro. Any one of them could score on you at any time, and so it was not very easy to exclusively mark one of these three to the point of figuratively taking him out of the game. Now, because it seems that the main task of scoring goals has fallen on Messi’s shoulders (in recent games), I find that opponents just find it easier to put 2 or 3 defenders on Messi thereby shutting him out of the game. Of course it doesn’t always work when Messi finds a way to score, but can you imagine what it would be like if when Messi finds himself in that position, the other two strikers pick it up and start banging in goals? And then there is the issue of the injuries that Barcelona have had lately. All these add up to slightly less than satisfactory performance from Barca in recent times as far as I am concerned.
B. Jose Mourinho’s football philosophy, or his tactical strategy towards games may be adored and praised by many, but I find it exasperatingly negative in matches against Barcelona. Anyone who has seen Real Madrid play against other teams realize that with Real Madrid’s formidable array of players (just look at their bench for crying out loud), they are capable of comprehensively beating any team in the world. The Real Madrid of yesteryears (before Mourinho came along) were masters at the beautiful free-flowing game of football. They had good attackers and good defenders and were content to let a game go on to its fanciful and spell-binding end. However, when Real Madrid meets Barcelona, for some reason Mourinho thinks it best to ask his formidable line of attackers to bury their goal-seeking instincts in order to defend the goal. I find that a very unusual strategy. Why in the world does Jose Mourinho think it a great strategy for a team like Real Madrid to “park the bus” against Barcelona—without directly or indirectly conceding that he considers Barcelona the better team? Does he think that Real Madrid cannot play a normal free-flowing game against Barcelona and win? 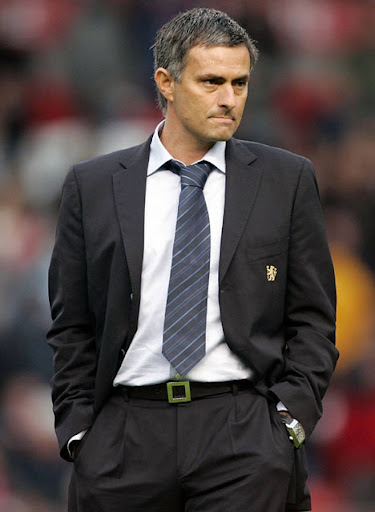 C. As we have seen in the first two encounters, Mourinho practically gave up the midfield and football possession to Barcelona; content to just massively defend, quickly counterattack and fall back in a massive defensive posture again. To his benefit, that strategy yielded a 1-1 draw, and a 1-0 victory over Barca to win the Copa Del Rey. But as anyone has seen, that strategy is not without its downside. For one, it makes for a very dull and edgy game of football. The Galacticos have an impressive bench to take on any team in the world without feeling a need to adopt an overly defensive posture. But since Mourinho had successfully employed this “park a bus” approach in last year’s Champions league semis between Inter and Barca, he obviously feels that is the only possible way of getting any result against Barcelona. Secondly, that strategy often results in an overly aggressive game of football—one in which every contact in the game is exaggerated and possibly milked for referee sympathy.
D. When Pep Guardiola noticed Mourinho’s strategy in the first two encounters, he switched it up for the third game. Seeing that Mourinho simply wants to keep his men defending at all times, and relying on quick counter attacks to demoralize, Guardiola had to come up with a new strategy. So what did he do? He decided that the best way to go about this was to maintain maximum possession. And so Barca was content to just pass the ball around all day, daring and defying Real Madrid players to come out and attempt to get the ball. The result was a very dominant and frustrating 71% of ball possession for Barca in front of Real Madrid’s home fans. At a point, the crowd became restless and wanted some results from their players. But because of Barcelona’s stranglehold on the ball, Real Madrid’s players were frustrated to the point where they became inpatient and overly aggressive. You could see it in the kicks, jabs, pushing and shoving, tugging and grabbing that ensued. And that was just what Barca wanted, for they milked it to perfection—diving and feigning injury at every opportunity they got. It was all embarrassing to watch Alvez and Busquets falling all over the place pretending to be hurt, only to quickly jump up and continue after a card had been given. But who is to blame Barca for Real Madrid’s intentional decision to play an overly defensive game? Is Barca to blame for the fact that Mourinho chose not to deploy his attacking talents in the game?
E. Tomorrow’s game is probably going to be like the previous ones. I expect to see another overly aggressive game of football where impatient Real Madrid players try to suffocate the dominant and slithery passing game of Barcelona. But I have a nagging feeling that we will see another serious round of drama tomorrow. Barcelona defeated Real 2-0 on the home pitch and as long as they maintain a tie in this upcoming game, they’ll advance to the final. But anything can happen. If Mourinho dumps this overly defensive posture and comes out to snatch goals, then truly anything can happen. They might even succeed in beating Barcelona on their own field—a feat which is well nigh impossible this season. Perhaps this last encounter will give lovers of football a memorable and entertaining game of impressive football to be discussed for weeks or possibly months. But I doubt that. In all likelihood, we are going to witness another ugly match to emphasize the depth and bitterness of this long-standing rivalry.
So in three games we have seen a draw, and a win by both Madrid and Barca. What would tomorrow hold? Will it end in a draw?

Posted on May 2, 2011, in Miscellaneous. Bookmark the permalink. 2 Comments.