Atheists On The Run

In which a discussion is raised on the cowardly evasion of Richard Dawkins:

I don’t know A. C. Grayling‘s reasons for not wanting to debate, but, if I remember correctly, Dawkins doesn’t do debates anymore. There’s a reason he hasn’t done one for years. As far as I know, he declared himself out of debating theists even before Craig’s current clarion call for a head to head debate. If anyone knows better, I’m open to being corrected.

I’ll start out by informing the initiator of this discussion thread that the president of the British Humanist Association Polly Toynbee has pulled out of an agreed debate with Dr. William Lane Craig in October claiming as her reason that she “hadn’t realized the nature of Mr. Lane’s debating style.”

It will be useful to provide a little bit of backdrop to this story.

First of all, I’ll encourage you to disregard the duplicitous pretensions by Mr Dawkins in this matter. I’ll get to it later. Let’s just state that for brevity’s sake, Dawkins’ staunch and inflexible refusal to debate Mr. Lane Craig, a formidable apologist for Christian Theism, has lately begun to sit uncomfortably with his fellow university professors and other eminent personalities in the skeptical movement. When a lot of hullaballoo was made about his seeming cowardice on the matter, even as he continues to reap handsome profits from the sale of a God-bashing book, Miss Toynbee decided to toss her hat in the ring to protect as it were, the ‘reputation’ of atheism or secular humanism from charges of being intellectually incapable of defending their beliefs and convictions.

So, she signed up to debate Craig when he visits the UK this fall as he challenges the fallacious fulminations in “The God Delusion” and defends Christian Theism against the now-fashionable assault by many of today’s New Atheists. There had to be a reason why Dawkins was running scared of Craig, but of course at the time, it will be fair to say that poor Miss Polly Toynbee was not cognizant of this. So you’ll have to admire her guts or bravery for offering to take on Mr. Craig. But upon closer inspection, it quickly begins to look like that all-too-familiar arrogance and hubris that unfortunately affects a lot of these New Atheists. Who on earth could Mr Craig be anyway that one ought to think twice about a debate with him? What preposterous and laughter-worthy points is some so-called philosopher from America going to raise to successfully attack atheism or skepticism anyway? Why bother to do any research on this chap? It is not likely that he would be on the same intellectual footing as we fashionable God-abolishers with his mumbo jumbo about the existence of God, so why are some respectable academics in the atheism and skeptical movements apprehensive of a debate with the fellow? So with nary a thought, and of course brimming with her cocky self-assurance, she offered to debate Mr. Craig without as much as knowing anything about the man.

In hindsight, it is rather hilarious that the woman chickened out of the debate afterwards. In all honesty, I cannot blame her much. My guess is that not too long after she cavalierly threw her hat in the ring, her handlers apprised her of the formidable nature of her opposition. Now, I am not going to suggest that she was painted a flattering picture of William Lane Craig, but whatever she was told, she was made to understand in unmistakable terms what heavy intellectual and perhaps political toll would be her portion from a widely publicized debate in which her highfalutin secular humanism or atheism was intellectually, imperiously and conclusively dealt a devastating blow. The fact is that for all the bluster, or the haughty pretension to a superior knowledge on the God-question, many of these militant evangelistic atheists and secular humanists are shockingly and I daresay disturbingly under-informed on exactly what they are supposed to be against. She can thank her lucky stars that she got out of a very severe public embarrassment.

Now, concerning Richard Dawkins, I wish to make it absolutely plain that I think he deserves respect in the field of evolutionary biology. That’s his area of expertise. The man has a gift for metaphor and for explaining evolutionary concepts in very beautiful almost poetic language. Whenever he is speaking on the issue of evolution (that narrow field in which he specializes), one may be well-served to listen to him and take his words seriously as they represent perhaps the most current understanding of evolution we have today. I make this caveat here first of all, to assure you that I do not harbor some visceral distaste for the chief apostle of atheism.

So what happens when an evolutionary biologist leaves his narrow area of discipline, and then dabbles into Philosophy or Theology by writing a God-bashing best-seller? Should he be given the same deference as he might be given when he is speaking on evolution? Should his words be swallowed wholly and uncritically by a majority of the self-styled New Atheists seeing as this man was pronouncing entirely on a subject that he has at best, a rudimentary understanding? One doesn’t even need to be a theist to see that the answer is a vigorous negative.

This is why some Christian and Skeptical groups have on their own privately sought to sponsor a debate where Richard Dawkins’ expostulations in his book will be robustly challenged thoughtfully and intellectually. It makes sense, doesn’t it? For example, if some economist, with little or no training in Biology decides to write a strongly worded book vehemently criticizing evolution, it is normal to expect proponents of the evolutionary theory to challenge that economist’s understanding of evolution.  Notice here that I am not saying that Richard Dawkins, or the economist in this case, have no right to write a book on any subject or academic discipline they fancy. But if they want to be taken very seriously, they should be very open to a mature and robust challenge of their understanding on the matter. This is where William Lane Craig steps into the picture.

We have seen that Richard Dawkins apparently has no scruples about debating persons of religious faith. His duplicitous claims of not debating creationists is belied by the fact that he has on different occasions debated people who are not rigidly wedded to his Evolution by Natural Selection like Alister McGrath, or people who might be in favor of Intelligent Design (spitefully dubbed creationism by the willfully ignorant) like John Lennox or indeed people who are creationists! We have seen that Dawkins is happy to join issues with lay clergy, and ordinary believers and theists. So let us dispatch this lie at once. When he was caught flat-footed with that lie, he is famously known to have said that he would love debates but only with someone like the Pope, a cardinal, an archbishop or some other visibly high representative for Theism. All these pronouncements sadly seem to be devoid of any real commitment. Why then is he afraid of debating someone who is reputed to be the best or rather the strongest mouthpiece for the opposition? Why is he running scared of Craig?

I suspect that the simple reason is because Richard Dawkins knows too well what a debate of that nature may do to him and his influence with this rapidly expanding quasi-religious New Atheism. As one of the four horsemen for Atheism in these times he has an image and a reputation to protect. By the way, the arguments that these New Atheists offer are neither different from that of atheists of the past century nor are they any more sophisticated. Richard Dawkins has seen clips of Craig where the unscientific and sometimes patently illogical and irrational presuppositions of latter-day New Atheists were graciously laid bare. For now, Richard Dawkins maintains that he is too busy to debate Craig—even as he runs to the bank with the handsome profit that a sophomoric treatment of the God Hypothesis has earned him. LOL, let’s not begrudge the man the fruit of his labors okay? As things stand now, it  appears that none of the shrill and highly regarded mouthpieces of the UK atheist and humanist community is willing to stand up and be counted. Of course, it’s always easier and fashionable for belligerent New Atheists to cajole and to mock on various web fora and in YouTube videos’ comments section. I suppose when Craig is done and gone, they’ll emerge to attack and discredit whatever he might have said. Nonetheless, I can’t help wondering how the rest of the high church of ‘internet atheism’ feel about this sort of spinelessness from their much adored high priests.

Truly, far from being dead or a delusion, the God-issue is alive and well in the US, the UK and many other parts of the world. Unbelief it would appear is not really anchored upon the realization that there is no God; rather it seems to be a willful and concerted refusal to accept one higher than oneself to whom one must give account. It seems to me that this New Atheism isn’t so much as a result of a genuine failure to see glaring evidence that calls for a creator; it seems to be anchored on a desire to rid oneself of moral accountability to some superintending moral law-giver; or a petulant fist-shaking at a God who as it were, failed to prevent some personal calamity from befalling one.

Conclusively, I wish to point out with very earnest tones that the truth or the falsity of beliefs and worldviews are not decided by the outcome of a debate. Inasmuch as there is no doubt in my mind that a debate with Craig will expose the laughable superficiality and the gross misrepresentations in Dawkins’ best-seller, I would not take that to mean then that the existence of God for example, has been conclusively proven or established. Likewise, if Richard Dawkins were to somehow demolish Craig’s argument in that debate, it wouldn’t also mean then that the existence of God has been refuted. It will simply mean that one side has succeeded over the other in making a compelling case for their worldview. Nevertheless, it still falls on you to honestly and sincerely weigh the evidence and choose your own worldview in the teeth of mankind’s incomplete knowledge of himself, his surroundings and the universe on a grand scale.

Atheists On The Run 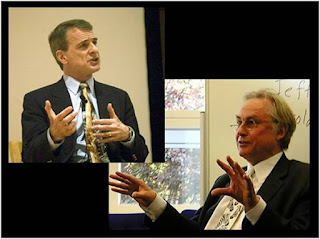 In which a discussion is raised on the cowardly evasion of Richard Dawkins:

I don’t know A. C. Grayling‘s reasons for not wanting to debate, but, if I remember correctly, Dawkins doesn’t do debates anymore. There’s a reason he hasn’t done one for years. As far as I know, he declared himself out of debating theists even before Craig’s current clarion call for a head to head debate. If anyone knows better, I’m open to being corrected.