When A Rogue Challenges A Thief 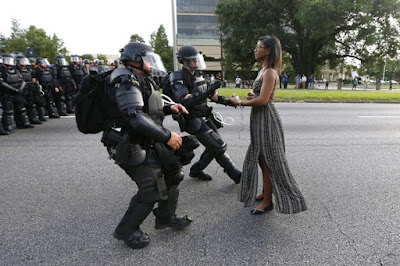 I saw a post on Facebook by one of my Facebook friends in Canada regarding the Black Lives Matter (#BLM) movement which pleasantly surprised me because of how accurately she was able to capture the essence of the movement especially now that we are noticing a concerted effort to de-legitimize the movement. I simply clicked the “like” button for that Facebook post and left not realizing that some serious discussions were raging down in the comments box. Somehow my attention was drawn to it, and upon reading the comments that followed, I realized that there were certain claims or lines of arguments that were being trotted out to silence the movement which needed to be countered.

First of all, since I have now read them, I have to confess that I am baffled as to how people in other parts of the world can truly understand or empathize with the severity of  the terrible legacy of slavery and institutional racism in the US—especially how it has manifested in the lopsided or disproportionate incarcerations or killings of the black minority population—WHILE some people just across the border in Canada completely fail to recognize this. Are they truly that insulated, that aloof, that disconnected from these sad realities? Or is this just a case of intentionally turning a blind eye and a deaf ear to the issue? I loathe to dismiss some with contrarian views as fundamentally comprehension-challenged, however it seems to be the most charitable characterization if one does not simply want to label them closet racists.
Now let’s review some of the false claims now being leveled in arguing against the Black Lives Matter movement (claims which anyone with a functioning internet connection can check up on and refute):
Consider this quote:

…. If 6 months ago I started wearing a shirt that said White Lives Matter. Do u not think that would be offensive? Do u not think if I wore that around Regina or the University people would think I was a racist? I honestly find the entire black lives matter movement to be racist. It discriminates against all other races and perpetuates hate and disconnection.

White Lives have always mattered in the US and I suspect in Canada as well. Printing “White Lives Matter” on your t-shirt, if you are white, is just redundant. To use a terrible example, it would be like clamoring for a “Straight Pride Parade” day after witnessing a “Gay Pride Parade” day. Or for a “White History Month” after witnessing a “Black History Month”. Anyone with any firing neurons would readily recognize that these days, parades etc are simply for recognizing and supporting minorities whose interests and vital contributions have not always been recognized. The unstated but obvious fact is that “Straightness” has always been the norm, the recognized, the celebrated. Or in the other case, that month was marked out to recognize and celebrate Black contributions—not because Whites did not contribute meaningfully, but that as the majority population, the rest of the months are, without explicitly stating it, already recognizing White contributions. As a matter of fact, you could argue that most of what passes for American history is “White American” history in this corner of the globe—even though there was significant contributions by people of other “races”.
The fact is, in the US, due to a long history of slavery and institutional racism (which by the way is not even denied by most Caucasians–there have been reams and reams of data and surveys collected on the subject), black lives have not mattered. We are talking from days when blacks were considered only three-fifths human or closer to the great apes than to modern man; to chattel slavery and forced labor; to the Jim Crow era and segregation; down through the centuries to the present day with disproportionate distribution of wealth, economic strangulation, disparities in employment opportunities, horrible disparities in the criminal justice system, and in the disproportionate murders of black people at the hands of the police–a militarized, trigger-happy instrument of the government. You may be excused if you do not live in the United States and thus do not really get to experience or properly understand the gravity of the things being discussed here, but please do yourself a favor and quit harping on something you do not understand. #BLM is simply a cry to redress these societal wrongs because in the grand scheme of things, it is obvious that Black Lives ought to matter TOO.

The truth is that all lives matter. Please watch some of the videos of what members of this group black lives matter are saying. They are not preachers for equality and peace but of inequality and hate. I think the energy being spent on this issues should better spent on fixing the real issues in a lot of black people’s lives in the USA and that is poverty, education and health care. we all need to stop focusing on the symptom and start to cure the true disease and it is not race it is poverty, poor education and health care for again everyone because all lives matter . Please do not get caught up in this hate mongering and discord.

There are lots of spurious, demeaning and harmful lies circulating in some aspects of the media, and in many exclusively or majority white enclaves/establishments, about the Black Lives Matter movement. Only the irredeemably obtuse, or shameless contemptible racists would, after being reliably and factually informed on what ‪#‎BLM‬ is truly all about, would continue to believe or speak such revolting drivel.

Unfortunately, many people you may see on TV purveying opinion that could potentially influence millions of ordinary Americans, and who realistically ought to be aware of the real facts regarding #BLM, are annoyingly or shockingly ignorant. A real disgrace.
#BLM is not a hate group; it does not preach violence against cops or against whites. #BLM does not preach that ONLY black lives matter or that black lives should matter MORE. These are some of the disgusting false tropes being spread to de-legitimize the movement. #BLM is the simple realization that historically, economically and otherwise, black lives have not mattered in this country– a country which purports to be guided by the proposition that all men possess certain inalienable rights and should be treated equally under the law; it is a protest against a corrupt and unfair criminal justice system that disproportionately targets and punishes or incarcerates black people; and finally, it is a cry for justice and redress for what has become glaringly apparent–the internal prejudice and bias possessed by many cops which have now manifested its ugly head in the rising spate of needless shootings and deaths for black people even when unarmed or when complying with the police.
All good men and women of conscience, whether they be black, brown, yellow or white, who have seen these injustices and disapprove, must now speak clearly to condemn these unnecessary police killings and intimidation perpetrated in their name and join together to seek for reform. Clearly, a militarized, trigger-happy police bodes well for no one because this is not a police state. If you keep quiet because you are white and feel that this issue should be tackled by black people alone because you are not directly affected, do not be surprised when some of these power-drunk, authoritarian and trigger-happy cops, are used to brutalize you or strip you of some these freedoms you hold dear–a reality which is now being lived and felt by many of your black fellow citizens.
Speak up NOW. Demand accountability. Demand change. Demand justice and fairness. Black lives also matter.