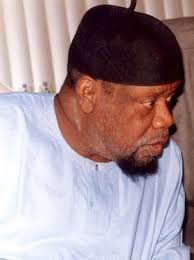 In recent news, one discovers that Dim Chukwuemeka Odumegwu-Ojukwu, the Ikemba of Nnewi, the Dikedioramma and Eze Gburugburu of Igboland, has fallen so gravely ill that there are now fears for his life. He is 77 years old. He was recently rushed to the University of Enugu Teaching Hospital where he received treatment for Cerebral Vascular Accident (stroke). This is not the first time that he has suffered from this debilitating ailment, but this time around, it seems to be more severe than was previously thought. He is literally in a coma, or supposedly recovering from one at the moment.
A lot of Igbo people, especially the good people of Anambra state, are very concerned. Many Nigerians, at home and abroad are remembering him in their prayers.
It seems that the situation has gotten more critical because as at this time, he has been flown to the UK in a special air ambulance for further treatment.
There are fears that he may not survive his treatment; in any case, God’s will be done. Let us remember him in our prayers.
Don’t know who Ojukwu is? Well, click here to read a Wikipedia entry on him.

Posted on December 24, 2010, in Miscellaneous. Bookmark the permalink. Leave a comment.