Plasas: To Eat Or Not To Eat?

I was talking to a Sierra Leonean friend of mine recently and somewhere along the discussion I remarked that I had never tasted a Sierra Leonean dish. Judging by her reaction, it was as if I had said something that was completely incredible. How was it possible that I had some Sierra Leonean (Salone) friends and never got to try one of their dishes? On different occasions she had mentioned that she cooked something called plasas—and I think at this point I really wanted to know what plasas looked and tasted like.
So she started to describe this Salone dish called plasas in a tone of voice that suggested it was something I would really love to try. Now, if you know anything about me, you know that I absolutely love a challenge—and I’ll try any dish at least once to see what it might taste like. I might pass out afterwards, but it will never be said that I was presented with a properly cooked traditional African dish and I simply refused to taste it.
Now, her attempt to describe this dish was not a success at all. She ended up confusing me. It was probably the excitement of wanting to win me over to some Salone cuisine, but somehow in the process of describing what plasas were she had mentioned potato leaf, cassava leaf, bitter leaf, pepper soup, boil soup, peanut butter soup, rice and stew, okro, fufu, tola and a lot of other things. My eyes began to cloud over; it was just a lot of information. As she explained, she said that plasas was just a mixture of leaves with creatures! I immediately began to cringe. I had that uncomfortable feeling one might have when confronted with a disgusting sight. What sort of unsightly little vegetation-ingesting little creatures like caterpillars or grubs might have actually made their way into the pot? At that point, unsure of how to describe this without confusing me any further, she simply began to look for an online picture to show me just what the dish was like.
While she searched, I took the opportunity to deride Salone cuisine. How indeed could people eat sugary or sweetened akara balls? How is it possible for someone to drink garri with salt instead of sugar? And on what planet, do people eat rice with groundnut paste? Yes, I told her quite plainly that in my estimation, and judging by some of the things they ate regularly, Sierra Leoneans had a weird palate. Now, if you are a Sierra Leonean reading this, resist the temptation to swear at me under your breath or to simply close the page. I was only kidding, okay? Don’t get your undies in a twist already. My heckling only served to get her to poke fun at Nigerian cuisine which sort of amused me greatly.
At long last, she found a picture and triumphantly showed it to me. It was as though in her mind she was saying. “Get a load of this yummy goodness and see if you are not simply blown away!” Well, to be quite frank, the picture I was shown was indistinguishable from the byproducts of a child with a severe case of the runs. One look at that fecal lookalike was all I needed to decide not to ever try plasas at all. But if you recall, I love a good challenge. So, I asked her to find me a Sierra Leonean restaurant or food carry-out place so that I could go there and at least try something. Perhaps, the picture was not doing justice to this particular dish or she might simply have obtained a less presentable picture of what could in fact be a gorgeous dish.
Soon she was able to locate a restaurant here. It was called After 12 Café African and Carribean Carryout. She furnished me with the address of this place, and all that was left was for me to man up, go to this place, and order something. What’s the worst that could possibly happen if I did not like the dish? In the worst case scenario, I’ll just fling the obscenity (if it was truly horrendous) into the trash, and thenceforth remember not to eat anything that I was not familiar with should I ever find myself in a Sierra Leonean’s house.
So when I was good and ready, I actually went down there like I had determined to do. 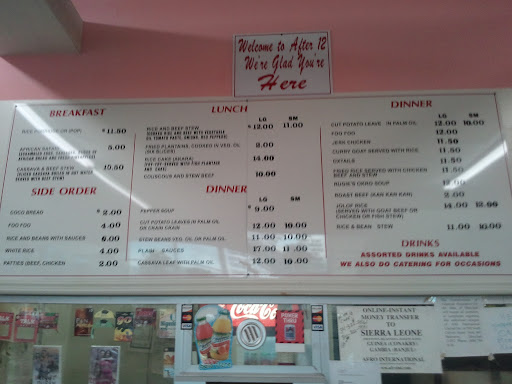 It was a very small restaurant—if indeed the place could be called a restaurant. It was more like a tiny office space restructured to look like a place of business; I imagined it has a makeshift kitchen sitting in the back of a front counter sealed off by bullet-proof glass; all around the little room, you could see different Salone-related articles on display. Indeed, it was just a carryout; a little Salone carryout. To say the least, I was a little disappointed. In hindsight, it was probably a good thing that I didn’t bring someone along with me on this first attempt. You can imagine how crushed they would have been if I had left all the comparatively bigger and nicer dining places to come to this little makeshift carryout place. I kept wondering if I should just turn around and leave. At any rate, I comforted myself with the thought that I came there on a first-case, experimental basis and that being the case, only the quality of the food should count—not the interior décor, nor the ambience, nor indeed the professionalism of waiters/waitresses as the case may be. 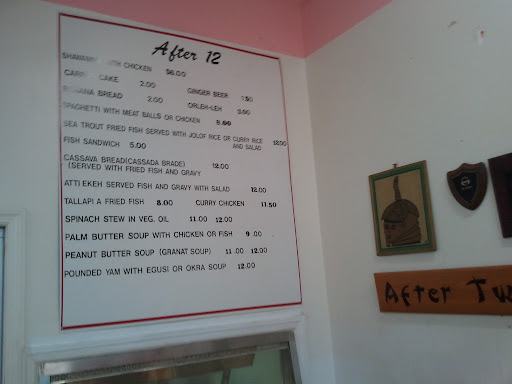 After looking around for what must have seemed like an eternity, I walked up to the man behind the bullet-proof glass panes and ordered my extra spicy potato leaf plasas with white rice and meat. I paid for the food and left promptly. I definitely would not eat at the lonely table they had sitting dejectedly in the corner—certainly not when other people who sauntered into the place could order their food, stand around looking at me, get their orders and roll right out. I went home and settled down to try this Salone dish. I must go through this ordeal; the die had been cast. 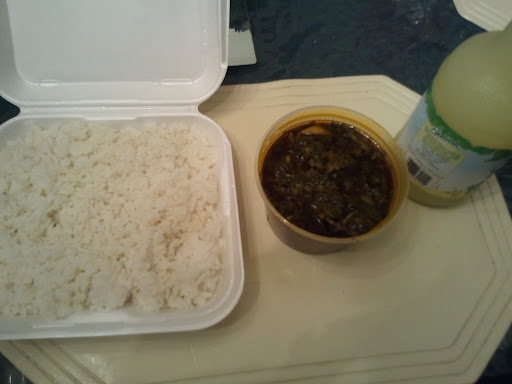 I tasted the first scoop. I remembered immediately that I had eaten something like this before from a Liberian friend of mine. I won’t trouble you further with many words at this point—the long and short of it all is that I absolutely loved the plasas and thus devoured the food hungrily. I’ll definitely go back there again to try other dishes.

Posted on September 22, 2011, in Miscellaneous. Bookmark the permalink. 2 Comments.